Hi, another ex tv show favs user here. Tried lots of similar aps, this one seems the best, but something is bothering me. I don’t see shows i didn’t start watching in progress, only shows I watched at least one episode. Same on the widget. Am I missing something or it can’t be done. SeriesGuide and TV Show Tracker are showing them normaly. Attaching screenshots of what I mean. 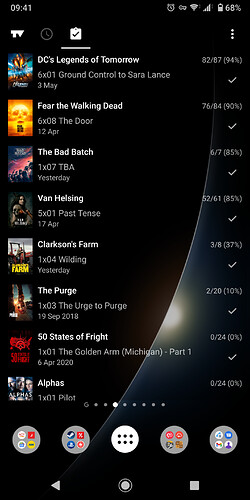 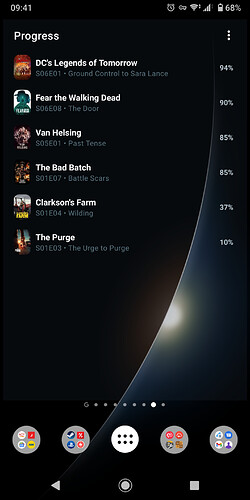 I have exactly the same question as a ex TV Show favs user. I have selected all the series I follow and setup everything but I don’t see anywhere where the new episodes are listed that are coming up?!? Is there a guide how to setup Moviebase and how everything works? The FAQ doesn’t say a lot to be honest. The app itself looks great but for me the most important option would be to see what new episodes are coming up and when.

I agree, it is a bit complicated. It is always difficult to transition from one app to another, specially from tv Shows Favs that was extremely well curated.

I am missing to be able to order the progress by “total unwatched” and the Schedule tab (where you could see what it was coming, but also what you haven’t watched yet in chronological order separated by a faint background colour…this was gold!). (see the screenshots).

I also have the same problem, as the other people in this chat, I cannot list unwatched series if I havent seen one episode first. For example, I saved anyway possible “Loki” but it doesnt show anywhere. It is not until I check the first episode as watch that it appears in the “upcoming” list.

Matt was an amazing curator and always so helpful, I am pretty sure he would offer his experience to the Moviebase developers

Anyway, great app here, is taking a while, but I am starting to love it here.

Too bad there isn’t a reply here yet. Another things I am struggling with is when I add a new upcoming series to my watchlist it doesn’t show in the calendar. So I have no idea when the first episode will air except scrolling through my huge list of shows I watch. Is there any way to fix this without ticking off the first episode as “watched” even when it didn’t air yet?

Have the same problem Mark. I have written about it in the forum as well, but I am not sure anyone (that can do something about it) is replying around here anymore

Hope we get some sort of reply soon.

(I know, this is not live threatening, but is the little things in live that make us happy for us with OCD

I’m yet one more formerly very satisfied TV Show Favs user. Like my fellow migrators, I have tried many of the alternative apps and settled on Moviebase, For me, it is the only one that’s close to having the functionality and UI that I want, and am used to having. So first of all, I am delighted to have such a high quality, well supported alternative. Thank you, Chris and any others who have contributed.

Of course there are opportunities for enhancement, and we come with a package of ideas for those based upon the functionality we have lost. So, I’m glad Chris is so open to suggestions and very actively engaged in constantly improving the app. Not having shows listed in “Upcoming” unless we have watched at least one episode (Watchlist shows, in Trakt speak) was a glaring difference that jumped out at me as well. I add my vote for that one.

With TV Show Favs, I always used its widget to display a full screen of upcoming episodes. It was very useful. So, when I was experimenting with various apps, I tried most of their widgets. As a result, I still have two other of those apps installed and set up, just to use their widgets. They interface with Trakt, so there is no double entry required. The apps are SeriesGuide and TV Show Tracker. Unfortunately, Moviebase has the least complete list of upcoming episodes, both in the app and in its widget, of any of these apps. And none of these widgets have the excellent customization options that TV Show Tracker included. Neither SeriesGuide nor TV Show Tracker provides a complete upcoming list; but between the two, most shows seem to be properly covered, including in the case of SeriesGuide, shows I have not started watching yet but that are in my Watchlist. So, I just wanted to make you aware of that, in case you would like to use the same as an interim measure. It helps me.

The progress/calendar is one of the next big features that I want to refactor.

Thank you, Chris. We look forward to the future developments.