Hi, I’m on 3.0.7 and I have a question about the “new episode” sorting option. I’m not sure if I understand it correctly because regardless if I sort it by descending/ascending order, it doesn’t appear that the shows are sorted correctly by new episodes.

See here for example: Imgur: The magic of the Internet

See attached for another example. 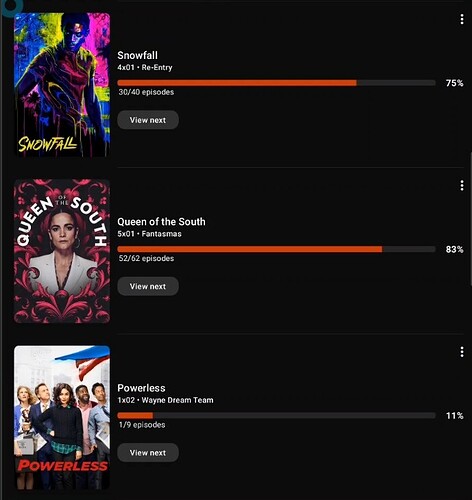 In this one, which is the same list as in the OP but just scrolled all the way to the bottom/end. You can see Powerless is at the very bottom, that one ended in 2017. Shouldn’t Selfie which ended in 2014 be all the way down here, but instead it’s sandwiched between the two earlier at the very top. That episode of Queen of the south is an April 2021 release and that Snowfall episode is a Feb 2021 release, so the Queen of the South show should be above Snowfall, but it’s not.

If they are suppose to be sorted by newest episode, then shouldn’t it be in this order:
outerbanks, queen of the south, snowfall, startup, powerless, selfie?

Very odd so I wonder if I’m not understanding the sort correctly, thanks for any feedback.

I have the same issue and hoping someone can fix it. I sent a request to fix in the app and never got a reply

Screenshot_20210922-1647351080×2376 367 KB
Shameless is a current show yet it is below shows that ended over 2+ years ago and Sabrina ended a few months ago and is below shameless. Seems random how it sorts. It gets like 70% of the shows correct in the list. I have tried sorting by tv show date, name and ascending/descending and still sorts incorrect. Current shows that aired today are in the middle of the list below ended shows of 3-4 years. Makes zero sense.