I’m new to Moviebase but have been using various apps and Trakt for a number of years now. For some reason on Moviebase I get loads of episodes and shows that I’ve already watched (in some cases a few years ago) and when I try to manually mark them as watched it tells me “Oops something has gone wrong”. I’m only able to add one image as a new user so have added the Moviebase list with the rogue entries but I also have a shot from Cinetrak with the accurate list for comparison if needed. A

For info, the episodes of Top Gear, QI, Would I Lie to You, Cats Does Countdown, Jonathan Creek, Cuckoo and Not Going Out should not be visible. I’ve attached the Cinetrak listing which is 100% accurate and aligns with Trakt.

I had a similar issue where items were just added, it seemed to be the same rogue titles.

Out of curiosity, do you;

In regards my issue, I’d delete/remove the titles but as soon as I completed a manual sync, they’d appear.

Do you use the newest Moviebase version?

Sometimes the TMDb and Trakt episode content is not the same. In this case it cannot mark this episode.
I will check this TV shows as soon as possible.

Hi Chris. That’s great, thank you! Yes, I do have the most recent version of the app.

The shows are:
Jonathan Creek
Top Gear
QI
Would I Lie To You
8 Out of 10 Cats Does Countdown
Cuckoo
Friday Night Dinner
Not Going Out

Thanks again, really appreciate it.

If it helps, here are the specific episode numbers but Top Gear in particular seems to have a few episodes. More than happy to provide further episode details if needed. 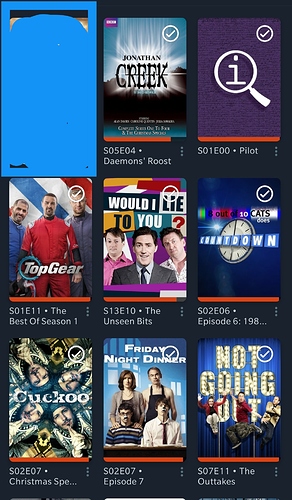 Moviebase uses TMDb as data source. You can edit the data on https://www.themoviedb.org

It seems that Top Gear has another episode in season one which seems wrong. I have reported it on TMDb: https://www.themoviedb.org/tv/45-top-gear/season/1/episode/11

Firstly, thanks for your help so far on this. I’ve requested a few changes on TMDB myself which seem to have now been amended (Jonathan Creek and QI for example).

THey are still showing on the “Progress” screen but when I go in to the seasons tab of that show (Open Show > Seasons) the correct info is pulling through from TMDB and the seasons (and series) show as complete.

Any ideas on how I can get these removed from my Progress page at all?

Thanks for contribute new content on TMDB, which helps to complete database for all users.

Sorry Chris. Appreciate I’m being hard work here. The changes in TMDB have taken effect and all episodes are marked as watched on the season list. But it still appears in my progress page! I’ve tried removing it and re-adding it, marking as unwatched then marking as watched again. All different combinations of removing and re-adding and it just won’t go. I don’t want to “hide” the show but I’m running out of ideas unless you can think of anything?

Normally it should refresh the progress item

Did you try to swipe the progress (small loading indicator pop up) or trigger the Trakt sync from the settings?

Yep. Tried everything. However, when I had a look on the Trakt website there does appear to be some issues with this series at their end with episodes and marking them as watched. With that in mind im happy to put it down to a Trakt error, hide the show and move on! Frustrating I can’t get a firm resolution but I’m pretty sure it’s a Trakt issue rather than a Moviebase one. Thanks for all the replies and trying to help though.

Sorry for that. I hope we can fix it. Maybe I can do something in the app?

Not sure, like I say, I think it’s more of a Trakt issue. Maybe you could do a little test on a series (say Jonathan Creek as that is a smaller series). If you add it to your Watchlist and then go in and mark all the series as watched, it should (I believe) then disappear from your Progress page. However, it doesn’t. All the seasons/episodes appear as watched but it still stays on that page rather than disappearing. Can you recreate the issue?

I have a feeling it may be down to how Trakt list the season compared to TMDB which causes a conflict or the app thinks there are still things to watch even when there isn’t?

I’m not sure. Like I say, I absolutely don’t think this is necessarily a Moviebase issue, more to do with how TMDB and Trakt list and number series differently. I’m a big fan of the app, it’s the best I’ve found to track series by a mile.

I read a post on Github which was similar to this but cannot find it, I’ll keep looking.

The Kodi add-on I use (Venom) had to program a work-around as the Trakt API would list Season 0 at the beginning but TMDB would list them at the end, this caused a number of issues and had to be adjusted from within the add-on to rectify the conflict.

I’ve been trying to improve the content between TMDB/Trakt/TVDB in the past weeks. Some content was not updated often enough and it still has wrong content in the server database (e. g. Jonathan Creek). The content on the database is wrong if you see something like episode number “26/32” and the state completed. Let me know about that

It should be better in the future, because of the many changes I did, but it is very hard to fix everything. I’ve also evaluated the switch from TMDB to TVDB, but many developers (e. g. TMDB, Trakt) have advised me to stay with TMDB. Especially because TMDB has many improvements planned.

The episode aired date-time will also be coming soon.

Hey Chris. Thanks so much for the update, the support I’m receiving is one of the reasons I paid for the lifetime premium subscription!

I’ve moved on to the beta and it’s working well. I guess there are always going to be challenges when trying to work with two different (user generated) databases (most other apps I’ve seen use one or the other) but it works really well and the UI is the best I’ve seen on any of these apps by a long, long way so I’m sticking with it.

I would still choose the Trakt APi over the others, mainly because Trakt pulls data from many sources and the data is alot more accurate in my view.

Hi Chris. Just as an update, I’m on the current beta and everything seems to be working perfectly. Some series where TMDB and Trakt don’t line up for episode and series listing took a little “tweaking” but it’s now all lined up and working like a dream. Thanks for all your support, I’ve now got my perfect tracking app!

Hi Chris. Just to follow on from this, I’ve recently had a random episode of Top Gear (S15E07) reappear on my watchlist. When I checked, somebody has amended TMDB to move it out of the specials back in to the full series (even though it’s a special). I requested it to be removed in TMDB but as it aligns to the official BBC lineup they won’t remove it. Trakt has it down as a special with 6 episodes in series 15 which I think it what causes the conflict.

I know you added functionality in the app for instances like this so that progress stays stable in the app but even when I mark as watched in the app, the next time I refresh it pops back up again. I’m on the beta so wondered if this feature had been temporarily removed?