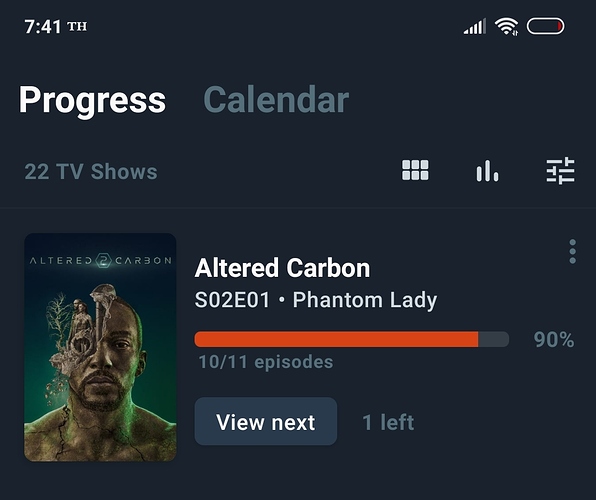 @chris Just today, Netflix released 8 episodes of the series “Altered Carbon” making 18 episodes(10 were released last season) total. But the moviebase app shows 11 episodes(according to it only one episode got released today) only.

I pointed the same problem in calendar a while ago. In calendar it showed only one episode to be released today but in reality there were 8 and should have shown 8 episodes in the list.

Also in some other post I told you about the problem regarding he font color in the widget. Please make font color of every text in widget to be white. As it is not visible when the opacity is changed to 0 with dark wallpaper.

Thanks for reporting it. The update on the airing day within the time zone is slow. It should be there now. Sorry for this inconvenience.

Thanks for the reply @chris. You have been awol for long time so I was worried if you are ok.

Actually my main concern in the previous post was number of episodes. Though it updated as on the broadcast of the season but only 1 episode was listed. It should have been 8. I know you will do the best it is possible to do. Have a great day

I am in vacation at the moment

The calendar can display only one episode at the time.

Glad to hear that you are enjoying some Me TIme. My parents don’t allow much of going outside of home bcoz of that pest “CoronaVirus”. Well thats just their concern. They Can’t change I think . lol. Just be safe and sound.

And I don’t want every episode to be in calendar. But if you could concatenate “+ N” (Where N is additional number of episodes to be released same day) in title or some where in the view. It would be helpful. Atlast It is upto you, if you think it is OK and implementable.
Thank You