Calendar not working as expected

Calendar doesn’t show all shows even when i have enabled “waiting and ended shows”. For example, “One piece” is scheduled to release next episode tomorrow and next week. But neither calendar not widget shows “One piece”. Please help. I want to enable every show that i have ever watched and is in watchlist to show next episode in Calendar. It helps me to check if the complete season is ended. I am a binge watcher. I watch whole season at once.

I will attach thumbnails which briefly describe the issue.
Feel free to contact me at kapiltapsi@gmail.com
I mistakenly reported same issue in someone else’s feedback, ignore it please.

Could you try to start a sync progress and refresh the calendar?

Thank you @chris for fast response. first i would like to tell you that app is awesome. though it is unfortunate that i faced some problems and i believe that you will help me. as you asked I tried syncing again. and one piece showed. Though only one episode (which is to be released tomorrow) is listed.But that may be issue of TVDB as on trakt 3 future episodes are there. also if it were possible to enable calendar for tv shows in watchlist. i have some shows which i yet to start watching and at the moment they havent completed the season so I am waiting. but they don’t show in calendar.
please add infinite calendar option so i can check all future dates.

i know it may be a lot but these will be helpful:hugs:

as you can see in image. altered carbon has 8 episodes which will release at once. but calendar shows only one episode to be released 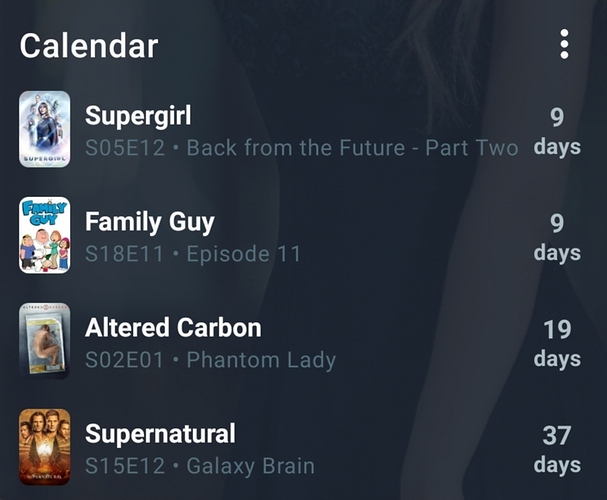 i am always there to test things if you want me to.

Thank you very much

I give my best for a good app. Unfortunately, Trakt (TVDB) and Moviebase (TMDB) have a few different TV shows, which needs more investigation in the future.

thank you for acknowledging the issues. I hope you will get it done for sure. thank you